Tough Crowds – Presenting Be Activated At The INCCS

I usually begin my seminars and courses by describing how amazing the body is, but I’m not usually talking to a group of young cancer survivors.

In October 2017 at the Irish National Conference for Cancer Survivorship in Dublin, I stood before of a group of people aged between 12 and 25 years, who were dealing with (on top of the age-related angst and the usual body image issues) something that I thankfully had not.

For a moment I wondered how the hell I was going to begin. Standing by a pillar in the Aviva Stadium in Dublin, illuminated by the sun, I felt unprepared. I ruminated on the words ‘how amazing our bodies are’. In context, the sentence seemed galactically inappropriate.

In for a penny… I grinned, took a deep belly breath and reached for eye contact. Rows of bowed heads met me, which without their iPhones and gadgets to hone in on looked weird.

I asked what did they want to learn from the session. No one answered. I pressed on. Did anyone want to share a story about themselves? No one volunteered. I managed to prise name, rank, and number from the first 5 kids.

So I stopped patronising them and did what I usually do. I picked the biggest and the noisiest person in the room, a 19-year-old who was almost 6 feet tall.

“What’s the story Bud?”  Why are you at this conference?

He revealed that he’d been bribed to attend, although he thought that it did sound a ‘small bit’ interesting. The truth was that as soon as the event was done, they, he and his Pals,  were heading off for a promised Go-Kart race. It was perfect. The tension was gone and the seminar commenced.

The young Lad was uber cool and witty. He casually mentioned that he’d had a hip replacement, a complication of his illness, which in his words had probably scuppered his plans of being a premier football player. This statement reduced the room to a volley of the most hilarious Dublin banter.

I got him up onto the plinth and demonstrated how clever the body really is at adapting, the group dynamic change and then it was all hands on deck.  Everyone wanted to learn how to body hack. Kids in wheelchairs, teenagers with walking sticks and leg braces, all eager to play.

They weren’t a tough crowd at all. They were just your ‘not so’ average bunch of youngsters who had a go-kart race to attend. 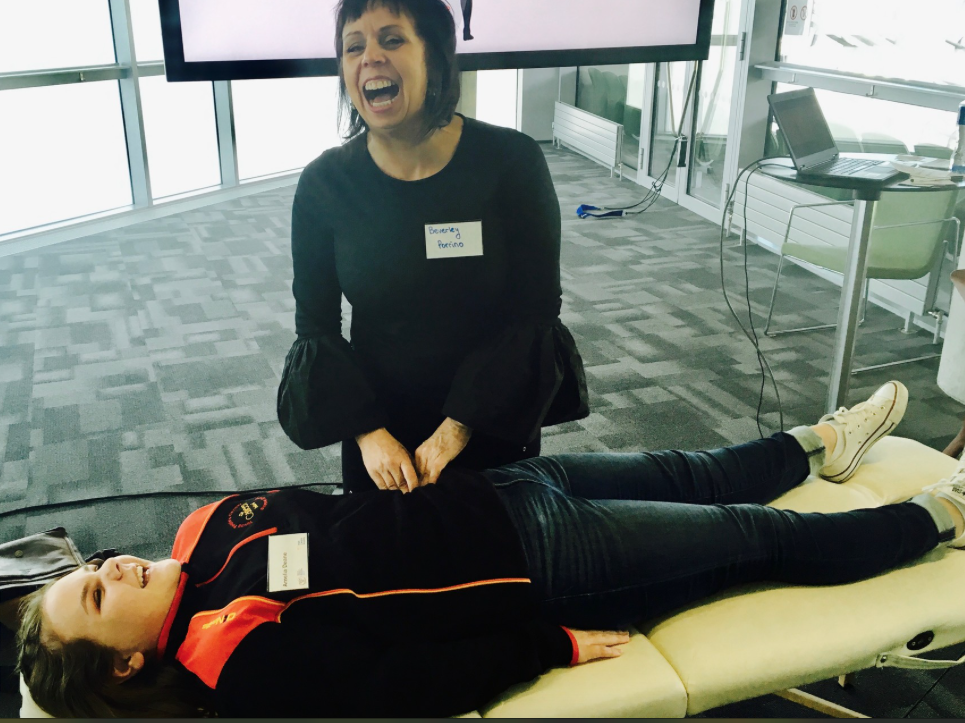 Be Activated is a powerful technique that is part of a much wider philosophy. The technique itself quickly elicits a relaxation response throughout the entire kinetic chain. It stimulates diaphragm function, increases oxygen intake and energy output and reboots your parasympathetic nervous system… and that’s when the magic begins.

About the Author Bev Porrino

Bev uses Douglas Heel's Be Activated Method in her clinic and in her Yoga and movement practices as well as supporting specialist community groups. She is the UK and Ireland Be Activated Course Facilitator and runs introductory workshops in Dublin.